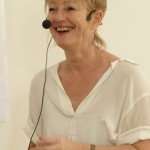 Stephanie Spink began her professional career as a Physiotherapist in Melbourne, Australia. In order to enrich her practice she began exploring alternative modalities for health, well being and personal development. She became intrigued by and engaged with the Feldenkrais Method in 1982, when for her, learning became living and living became learning.  Graduating from the […]

Arlyn Zones (MA Theatre Arts) has been involved in the Feldenkrais Method since 1977 and graduated in 1983 from the last training that Dr. Moshe Feldenkrais conducted.  She is one of the most experienced Trainers in the U.S. and has taught in numerous trainings worldwide.  She has directed her own programs  in Europe and North […]